a name that can be named is not the constant name

It is interesting to see how hypertext has gone from being a grand possibility to a never-finished chore. --Ted Nelson 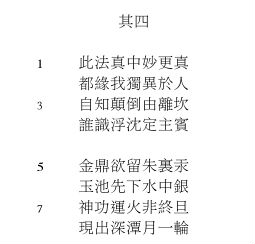 When I began to study Wu Chen P'ien/Wuzhen pian I was comparing Fabrizio Pregadio's translation (Awakening to Reality) with that of Thomas Cleary (Understanding Reality).
September 17 at 12:13pm ·

At the end of the fourth poem of the first
sections Pregadio has:

"The cycling of fire in the spiritual work before the
light of dawn will cause the whole of the Moon to appear in the Deep
Pool" (p 34).

"The spiritual work operating the firing does not take a
whole day before it brings out the orb of the sun in the deep pool"
(p.41).

Surely, it must be one or the other, moon or sun, unless
the original term is more general, something like heavenly body or
celestial object.

My intention was to indicate that Pregadio provides the
original text, but today I am not able to get beyond Poem Two on
Google Books:

and Amazon seems unable to load the page:

Cleary's translation is at:

http://books.google.com/books?id=vGFs3yIMCFoC&printsec=frontcover&dq=thomas+cleary&hl=en&ei=rct0TojLNcTIgQfd68TKDA&sa=X&oi=book_result&ct=result&resnum=2&ved=0CDcQ6AEwAQ#v=onepage&q&f=false
Awakening to Reality
books.google.com
Awakening to Reality (Wuzhen pian) is one of the most
important and best-known T...aoist alchemical texts. Written in the
eleventh century, it describes in a poetical form, and in a typically
cryptic and allusive language, several facets of Neidan, or internal
alchemy. The present book presents the fir...See More
September 17 at 12:14pm · LikeUnlike ·
o
Aspen Bai where is the problem?
September 17 at 12:34pm · LikeUnlike
o
Steve Marsden One guy says "Moon" -- the other guy says
"Sun" -- is it one or the other or can it be either/both? When you ask
"where is the problem?" perhaps you are suggesting that it does not
matter whether it is Sun or Moon.

One (minor) problem is that the first time I looked at the
Pregadio on Google Books I could see Poem Four and today I am not able
to get beyond Poem Two.
September 17 at 1:18pm · LikeUnlike
o
Aspen Bai well, the book your book you are reading is
about making elixir, so I can't interpret it precisely. But here is
what I would do; I would read I Ching which was the fundamental of all
kinds of sects of Chinese culture and which influenced the way we
think. So in general, based on Tai Chi, Ying and Yang present
together, combined the entity of universe. Sun is Yang; Moon is ying.
Simply speaking,if your body is very cold,you will need more yang
which means to expose in sunshine a little bit more; if your body is
very hot, you need to nourish Yin. As you can see, you could find the
right translation by yourselfmbased on the context.
September 17 at 1:31pm · LikeUnlike
o
Aspen Bai the ancient writings are difficult for Chinese
people too. But for thousands of years we have believed in what our
ancesters believed and followed their basic instructions. One could
achieve to decode Chinese philosophy and science if he really knew
about my country and my people
September 17 at 1:33pm · LikeUnlike
o
Aspen Bai don't believe in me too much. I just provieded a
point of view, an option. I'm too young and too ignorant to interpret
my ancestors great wisdom.